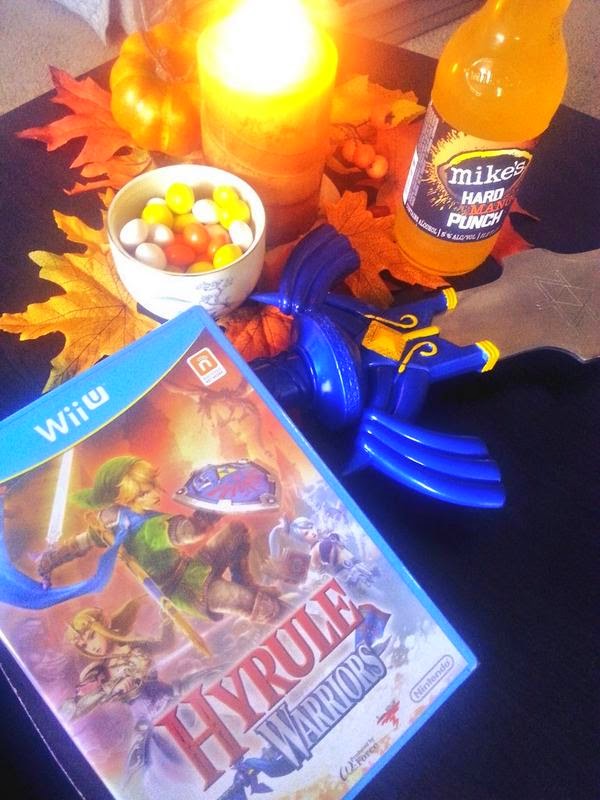 I can't recall when I first heard about this game...it was either by Nintendo Direct or E3...I don't know, but it doesn't matter. I'd been waiting for it for a long time. It finally released in North America this past Friday (September 26), and, having pre-ordered it, I picked it up after work.

Played for a few hours Friday, 8 hours Saturday, and another few hours today before beating it.

I have so much to say, I'm not sure where to start. lol 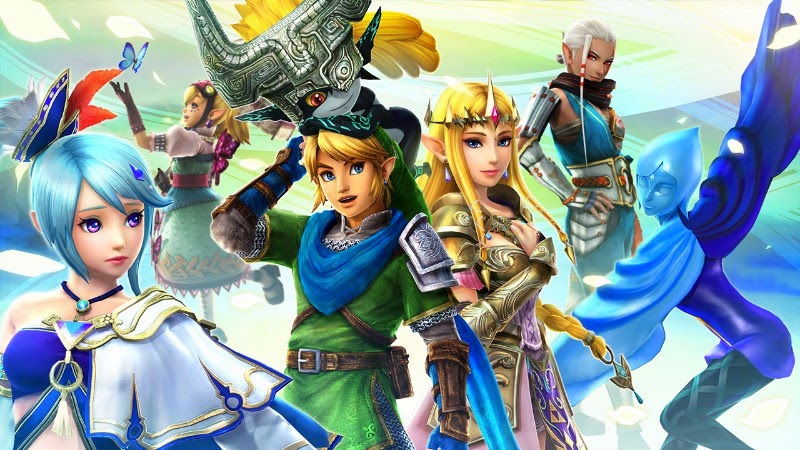 This game made me really happy. It's not a Legend of Zelda game, it's a Dynasty Warriors game with Zelda characters and storyline. We can't legitimately include it in with Zelda's franchise and timeline, it wasn't meant to be that way. But it brought a lot of ideas forward that I feel could really evolve the real LoZ franchise.

There was a Narrator in between missions who actually spoke for us, and that's definitely not something we see/hear in Zelda games. A lot of people are saying it's a sure confirmation that Zelda NEEDS voice acting...instead of the mere grunts and giggles we're used to paired with visual text.
I have mixed feelings about that. While voice acting for characters would be a huge character development, omitting it leaves more for the imagination...which I have liked since 1998. So...who knows what change will make me think.

The button mashing beat-em-up genre isn't new to me - I've done a few arcade games like that plus Super Smash Bros, Jak & Daxter, and a few others. But I've never played a Dynasty Warriors game before. It was definitely different. It felt really satisfying to use Zelda-esque attacks to completely blow away a hoard of enemies at once. I felt really powerful. lol And the animation for leveling-up, defeating a key character, and dealing a crippling blow to Ganon was pretty epic. 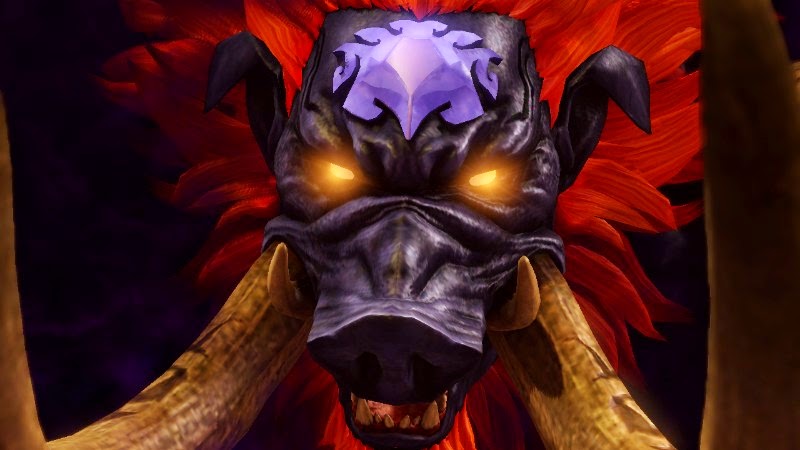 One thing I felt the Legend of Zelda world benefited from with this game was the stronger incorporation of Link's personality! In early Zelda games it seemed Miyamoto wanted shy away from giving Link too much character as he was meant to literally be a "link from the player to the game." And so it made sense Link was pretty bland so the player could better use him as an avatar rather than a player. However, we've seen his personality grow and grow over the years, getting really prominent in Skyward Sword (portraying emotions of love, hate, anger, and sorrow). Now in Hyrule Warriors, despite the game not being part of the official timeline, we see Link display a vast array of character traits that we couldn't officially peg him with before. 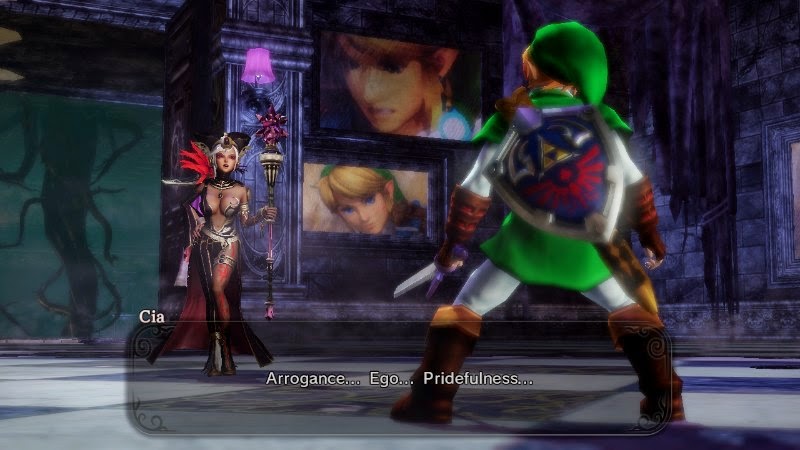 Aside from his range of visual expressions, the game clearly narrates his inner persona. Cia mentions his "arrogance...ego...pridefulness..." which are the ingredients from which she creates his Shadow Link clones. Of course, we can also make the connection that that's how Ganondorf worked it in Ocarina of Time, forcing Link to literally have to "defeat himself." 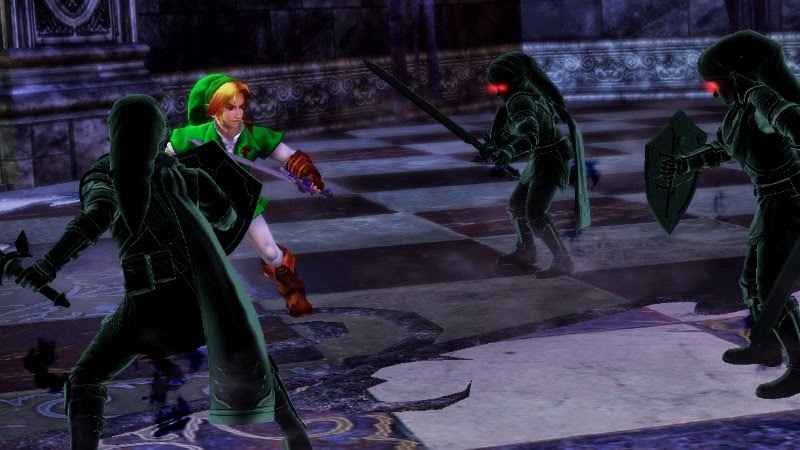 Earlier in the game, after obtaining the Master Sword, the Narrator also mentions how Link grew overconfident, charged headlong into battle, and got ahead of himself.
Seriously? Link, you brash son of a gun. :] I suppose we could've gathered he was that type from his more subtle actions in the Zelda games, but now we've got a more solid idea of what kind of person he is. 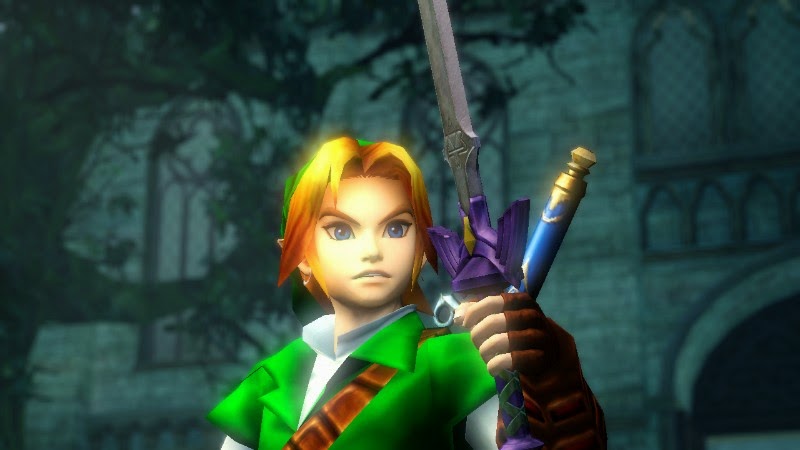 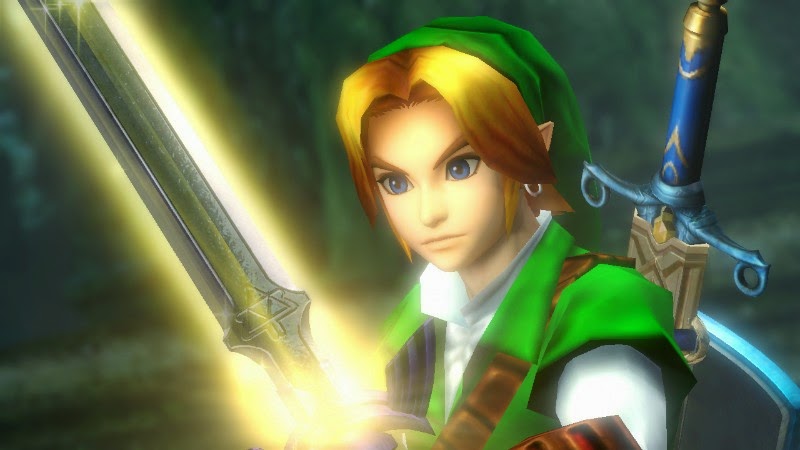 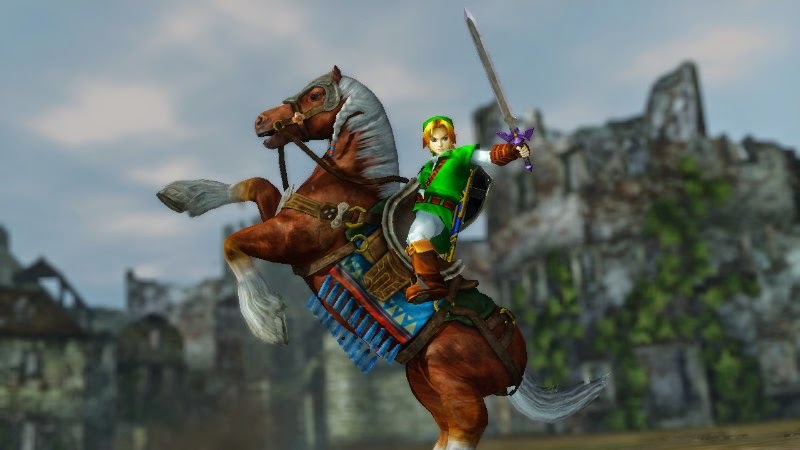 You've probably noticed by now I'm posting my screenshots of Link in Ocarina of Time (Hero of Time) attire instead of his Hyrule Warriors getup. I preordered the game from GameStop and got the Ocarina of Time costume download pack for free. I'm totally happy about this...what with OoT being my favorite Zelda game. :] So, I used this costume as much as possible for him.

I swear this game created some pretty crazy scenarios I deemed akin to fan fiction material before the game's release. I feel that way even stronger now that I've played it. It linked various Zelda games (Ocarina of Time, Twilight Princess, Skyward Sword, Majora's Mask, etc) quite literally, for one...and crossovers are something only fanfic authors have fanfic authors and fan artist have brought to life if their work. 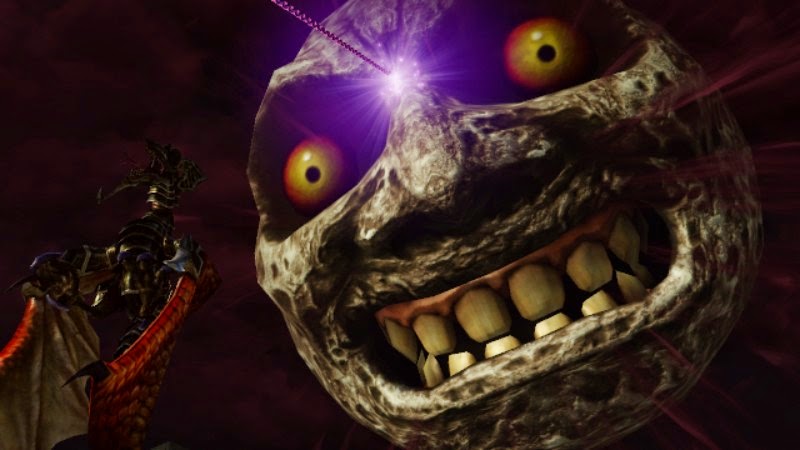 Crossovers, Zelda taking special interest in a "knight" (Link) in her army, female versions of Link (there were originally plans to have a girl that looks like Link in the game...supposedly his daughter), Zelda fighting like a warrior, and even a character taking a serious romantic interest in Link other than Zelda (and Ruto...). 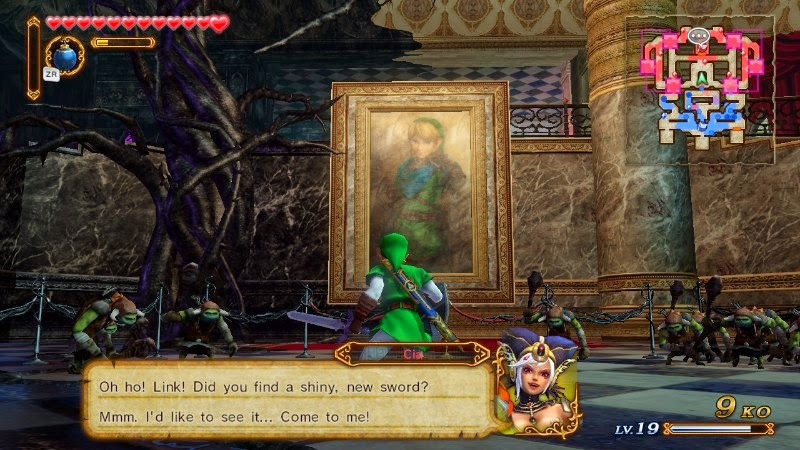 ^^^ Are you freaking getting this??
Before now, you only ever saw these kinds of things in fan fics and fan art. And very prominently...to the point it's become cliche to write/draw about. It's just strange for me to see Nintendo actually letting it go in that direction. Smash Bros doesn't count IMO as it's not meant to focus solely on the Zelda universe. We got to see how characters from different games interacted with each other...characters who'd never otherwise have a chance to meet. Like Midna and Ruto, Impa and Zant, etc. It was quite a site to see Fi talking to the Hero of Time, who, originally is from a time far in the future! 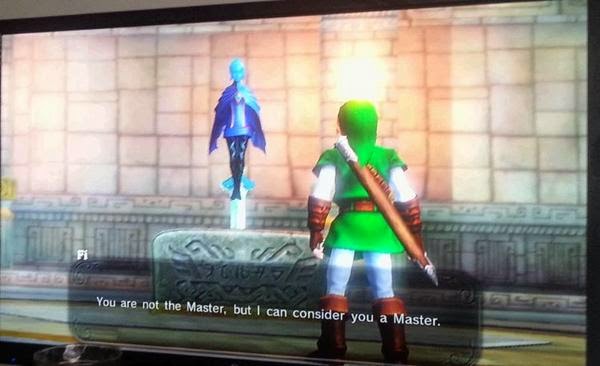 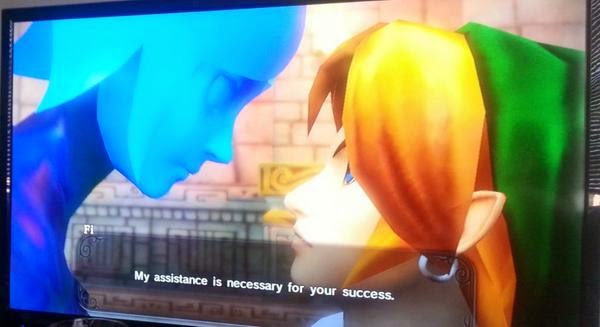 So many weird fantasies were realized in HW, and it had me (quite literally) rolling with amusement. Playing as characters other than Link = awesome. 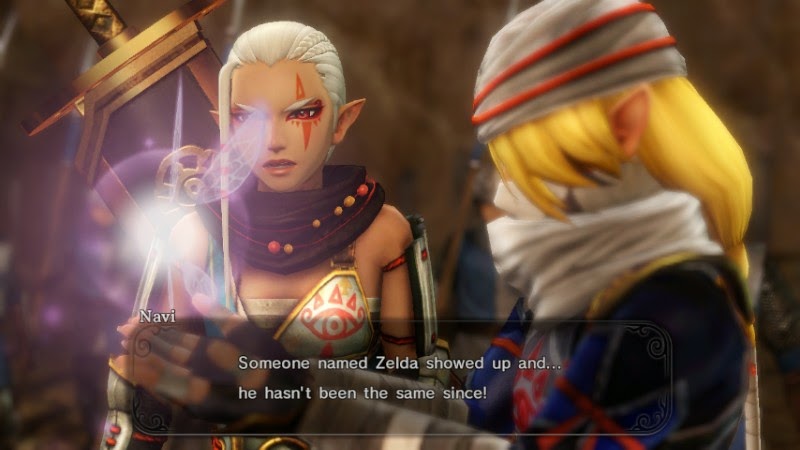 I'm so glad Impa doesn't look like an old woman anymore despite the white hair. Her design finally suits her role. 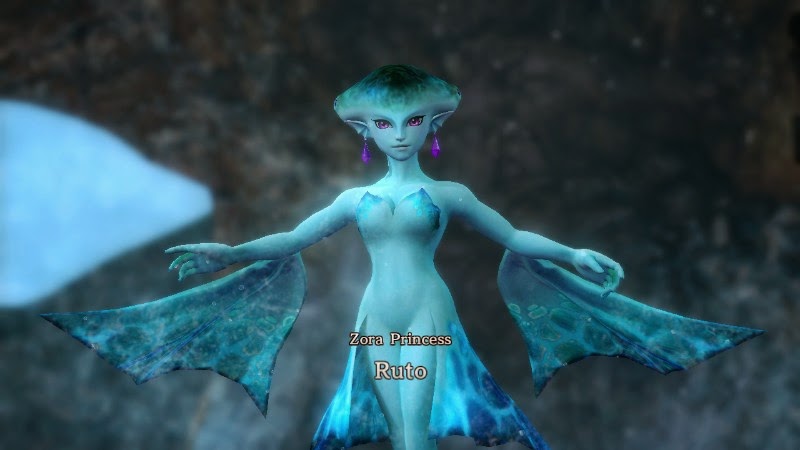 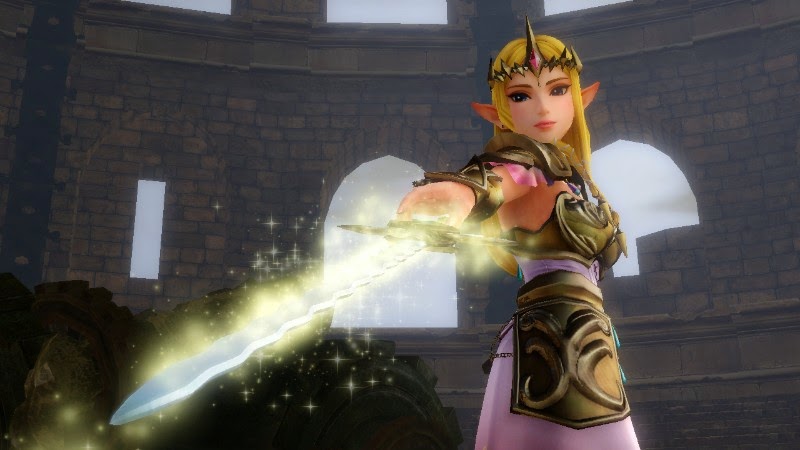 Hell, I love Zelda's design, too! Great artwork in this game. 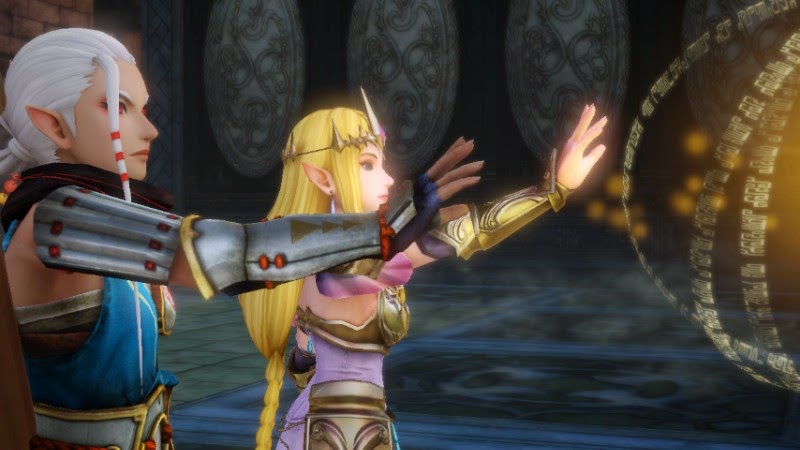 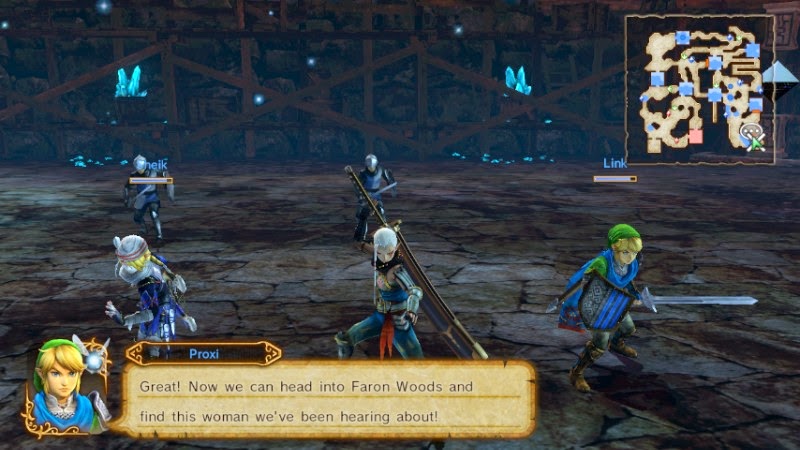 Of course a fairy "Proxi" did all the talking for Link, 'cause our hero never talks ... yet!

I was really looking forward to playing as Fi ... she definitely didn't disappoint! 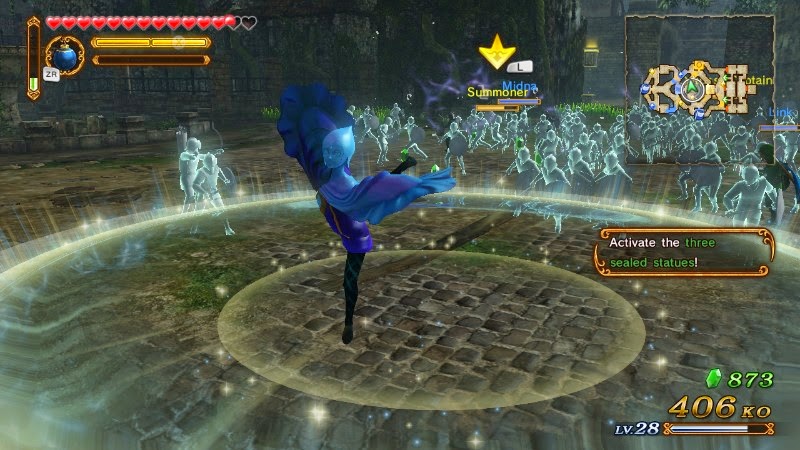 I'm kinda bummed we didn't get Nabooru...maybe she'll be a downloadable character later? Here's to hoping. :] Lana felt reeeally out of place to me. Honestly, she gave me a magical girl anime vibe...not Legend of Zelda material. But she is unique to the Hyrule Warriors game, so I suppose it's acceptable. I'm not really into the whole...SUPER KAWAII ANIME GIRL cliche, and some of those noises she makes I swear only belong in a hentai...lol But at least she's powerful. 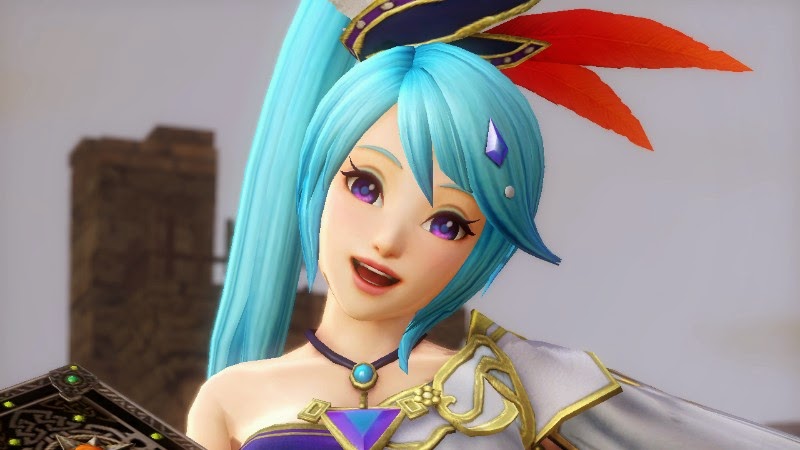 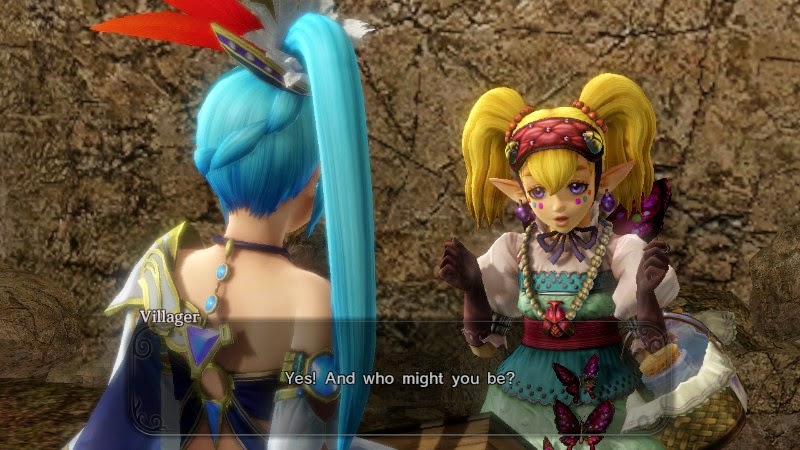 There were some other things I really didn't like about the game as well. For instance...playing as Ganondorf and other enemies. While it's a nice thought, and some people really enjoyed it...I just got so frustrated that I had to fight against the good guys to achieve a goal that I was just going to undo again when I inevitably switched sides again. And you're forced to do it to advance in the game, it's not like you have a choice. And...fighting against Link? Come on...why would I ever wanna do that... And, random yet relevant: they kept calling Zelda a princess in game...when we were officially told she's supposed to be a queen this time. Kinda disappointed. 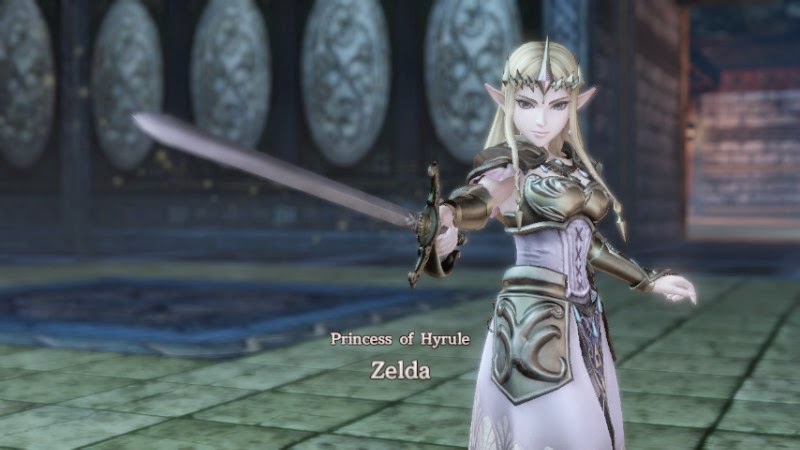 Those Gold Skulltulas we're supposed to hunt and kill in the middle of epic battles? Yeah, no idea how that's even possible if we want to win. Guess I'll be looking at a guide later. And Cia. Let's talk about mother effing Cia. I'm about to get really personal with this, sorry I'm not sorry. Nintendo got EXTREMELY bold with this game. Not only did they introduce some prominent sexuality in a Zelda-based game...they full on made a character who was so lustfully obsessed with Link, that she sold her soul to have him. And I couldn't help but feel like every Link fangirl was being made fun of with this gesture. Probably just me being self-conscious, but I'm being honest. I've never seen anything like this in a Zelda game before, and they really took advantage of the "unofficial" situation. 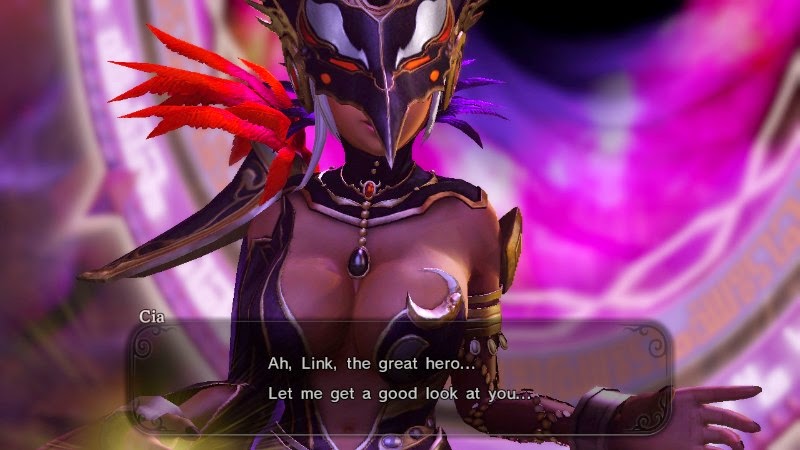 Cia was supposedly a powerful sorceress who kept balance of the Triforce since the beginning of time.......aka a random-ass broad made up for the purpose of this Musou game storyline 'cause there's no way that makes sense in the official Zelda franchise. She watched Link's spirit be reborn over and over again through the ages to save the land and ended up falling desperately in love with him. When darkness entered her soul, it forced out the light which became Lana. So, Lana's also in love with Link, and we see some really awkward moments with her, Link, and Zelda (who also is obviously into him). 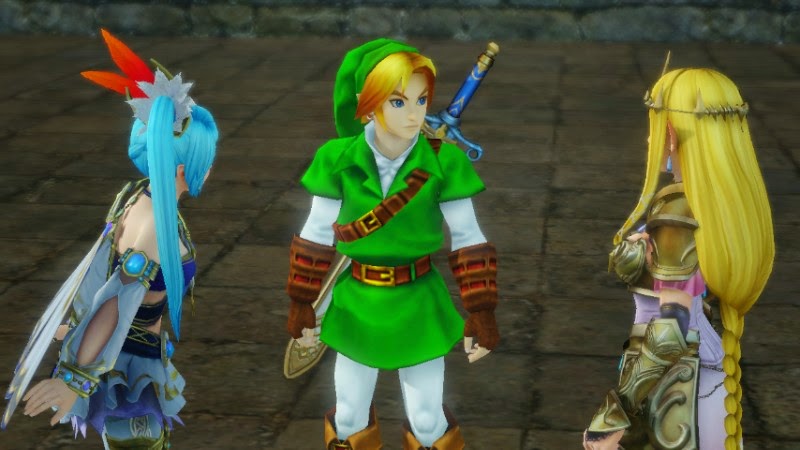 It reeeeally doesn't help that they made Link extra gorgeous in this game. I was reeling the whole time 'cause it felt like they were providing some kind of insane fanservice for people like me who've had a thing for Link since childhood. Stop it. :C That's not fair. It made sense, though, that Cia was overly sexual in her nature 'cause it was lust that caused her to deviate from the light. Still...in-your-face ass and boob shots? In a Nintendo game?? FOR REAL??? (Temla hardly counts...cleavage isn't necessarily sexual.)

Also, she's pedo for having statues of Kid Link. :p 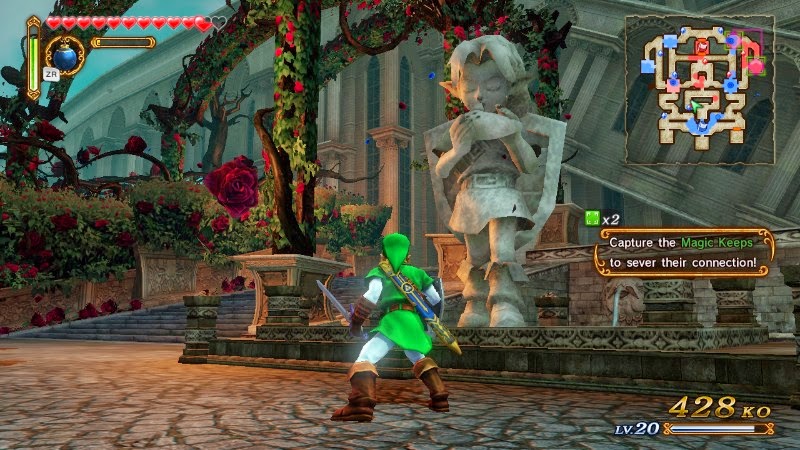 Anyway...I gotta get to bed, but I've made my biggest points. I loved the game, and still have to go back and do Adventure Mode to unlock some characters plus get more badges and other fun stuff, but...I did enjoy the Legend. Provided me with a new experience and a serious challenge...and brought out a lot of feels I didn't know I still felt. lol That final battle had me on the edge of my seat nearly sweating. Kudos for that. Perhaps someday I'll find my own real "Link" so Nintendo won't have such a tight grip on my emotions. lol
Nostalgia will always be there, though... damn nostalgia...

"Submit to the wonders of the universe." ~Uni